Thanks to its height-adjustable tracked chassis, the SM 620 K Plus is always right on track, even on uneven and rough terrain – and is also able to handle demanding screening tasks very quickly and reliably.

Landfill mining with Doppstadt Rugged and flexible technology for a profitable process.
More

Composting with Doppstadt: Perfect results at every step of the process.
More

The SM 620 K Plus is mounted on a rugged tracked chassis with 500 mm wide tracks and at two travel speeds. An important upgrade over its predecessor – the SM 620 K Profi – is its Load Sensing System: This allows the machine to move and work at the same time, making the SM 620 K Plus capable of multitasking.

Another enhancement over the previous model is the Deutz engine: The applicable emissions regulations made it necessary to upgrade from Stage IIIB/Tier 3 to Stage IV/Tier 4 final. The tank capacity was also increased from the previous 300 liters to 400 liters now.

The SM 620 K Plus drum screening machine is optimally equipped for screening almost all types of waste and raw materials – and thus making a forward-looking contribution to recycling. 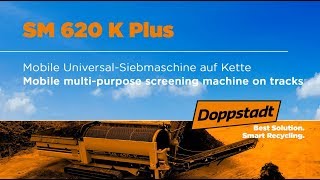 HERE´S HOW TO CONVINCE CUSTOMERS IN AUSTRALIA!

HAPPY EASTER, MAY IT BE A WONDERFUL TIME!

MORE DOPPSTADT POWER FOR THE KANTO AREA IN JAPAN

“YOU CAN CHOOSE YOUR FAMILY“

So compact and so flexible: new AK 315 is available now

Successful dealer meeting at the Coreum

Made in Germany: that’s what matters